With the rapid development of network, 10 Gigabit Ethernet has been widely used in various fields. Therefore, SFP+, a kind of optical communication product which can support 10 Gigabit Ethernet, has gained much attention among data network users and vendors. Take Finisar 10G SFP+ as an example. Finisar is one of the world’s largest telecom suppliers and wins large market share with its SFP+ transceivers. The Finisar Compatible 10GBASE-SR SFP+ with 850nm wavelength and LC duplex can transmit at the data rate up to 10 Gbps. It is obvious that this kind of product meets the requirement of high transmission data rate in application. Is this the only reason why SFP+ becomes popular? The answer is “Definitely not”. This passage will guide you to learn more about SFP+ modules.

SFP+ module, or SFP Plus, is a hot-pluggable, small-footprint optical transceiver that supports data rate up to 10 Gbit/s. It also supports 8 Gbit/s Fibre Channel, 10 Gigabit Ethernet and Optical Transport Network standard OTU2. In addition, as an enhanced version of SFP module, SFP+ module is interchangeable with SFP module and can be used in the same cages as SFP module, allowing the equipment manufacturer to reuse existing physical designs for high-density port switches and modular line cards. Here is a picture of SFP+ module. 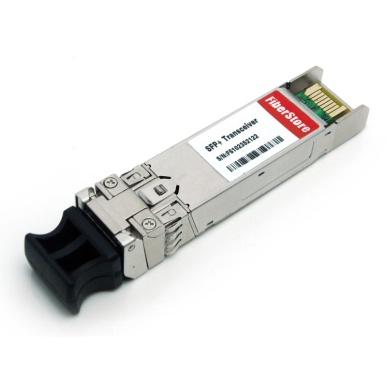 Besides being able to transmit at data rate up to 10Gbps, SFP+ is also characterized by other features, such as smaller in size, lower in cost and more efficient in the application.

SFP+ modules leave more circuitry to be implemented on the host board instead of inside the module. For example, SFP+ module significantly simplifies the functionality of the 10G optical module by moving such functions as clock and data recovery (CDR), electronic dispersion compensation (EDC), 10G SERDES, and signal conditioning that traditionally resided inside the XAUI-based module into 10GbE PHY devices and line cards. As a result, the modules are smaller. The figure and table below shows the comparison between X2, XFP and SFP+.

From the figure and table above, we can easily find that SFP+ module form factor is 30% smaller in comparison to X2 or XFP modules. In addition, it uses less power, requires fewer components, and is less expensive than the 10-Gigabit small form-factor pluggable module (XFP) form factor, which was already smaller and used less power than the XAUI-based XENPAK and X2 form factors. Here is a table showing the price of Cisco 10Gbit/s X2, XFP, XENPAK and SFP+.

Each SFP+ module houses an optical transmitter and receiver. One end of the module is an SERDES framer interface (SFI) serial interconnect, which handles differential signals up to 10 Gbps; while the other end is an optical connection that complies with the 10GbE and 8GFC standards. SFP+ modules do only optical to electrical conversion, no clock and data recovery, putting a higher burden on the host’s channel equalization. And it has become the most popular module on 10GE systems for allowing higher port density.

As a new generation of small-factor form, hot-pluggable optic transceiver, SFP+ has been optimized in several aspects and can meet the requirement for high transmission data rate in the applications of telecommunication equipment, data center cabling infrastructure. I hope after reading this passage, you can have a thorough understanding of SFP+ module.